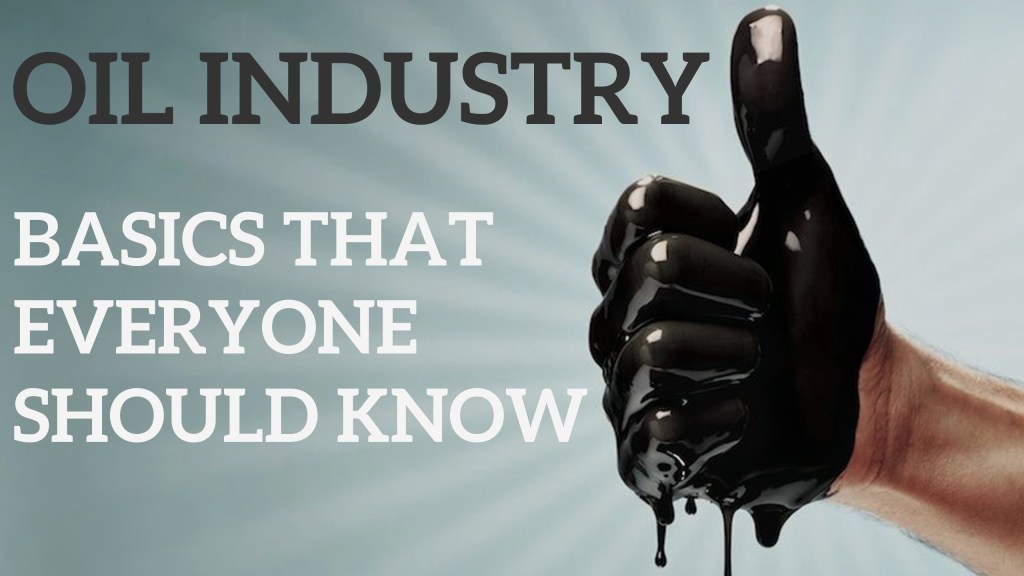 Being a financial analyst, it’s a given that when ever I’ll meet friends, a discussion on Oil prices will come up. And after several such discussions, I have realized that general public needs to aware of some very basic information about Oil, the industry, and it’s dynamics. That’s the main purpose of this slideshow. While going through these slides, keep in mind that they a) are directed towards general public, b) contain most basic facts which are easy to retain and understand, and c) several terms and concepts have been simplified keeping the target audience in mind. By the end of this presentation, you should be able to understand the basic properties of oil, oil refining, sources of oil supply, Sources of oil demand, and major oil market players. Enjoy!

1. 5 basic facts about Oil that everyone must know
2. Contents
3. Key Features of Oil
4. Oil is a natural liquid mixture of hydrocarbons. Two critical properties of oil are a) The Density of Oil, and b) Sulphur Content What is Oil?
5. Density is measured with a scale called API (American Petroleum Institute). Units of this scale is called Degree. A higher API means less dense mixture. Oils with API greater than 31.1 degrees are called Light Crude Oils. They are expensive and more desirable than Heavy Crude Oils.
6. To put things in perspective, API of water is 10 degrees. Oils with API higher than 10 degrees float on water.
7. Oils with lower Sulphur content are more valuable. Sulphur reduces the energy value of crude oil. – Sour Crude Oils: Oils with more Sulphur content (more than 0.5%). Sweet Crude Oils: Oils with less Sulphur content.
8. Sulphur in Dubai/Oman Crude oil is 1.04%. Sulphur in Brent and WTI Crude oil benchmarks is 0.45%. (Dubai / Oman / Brent / WTI are different types of crude oils being sold).
10. Refining Oil
11. Crude oil is of little use in its original form, therefore, it needs to be refined before becoming usable. After the oil is extracted, there are five stages of oil refining.
12. Distilling: Every hydrocarbon has a different boiling point. In distilling, crude oil is boiled to separate the different qualities of oil. The most valuable output here is petrol (gasoline). Heavier crude oils (higher API) have lower petrol content.
13. Cracking: Heavier oils are broken into shorter chain molecules. Combining: Shorter chain molecules are joined to make heavier oils.
14. Modifying: In this process, chemical composition of oil products is changed to make more value-added petrochemicals.
15. Treating a& Blending: Impurities like Sulphur and Nitrogen are removed in this step 4 & 5.
17. Sources of Oil
18. Onshore wells: Large deposits of oil are trapped at high pressure beneath the ground. – Oil companies insert a pipe (in layman terms) in this area and oil flows out due to pressure. – Production from onshore wells varies between 10 barrels per day to 500,000 barrel per day.
19. A barrel is equal to 42 US gallons. That’s it.
20. The world’s biggest oil field is Saudi Arabia’s Ghawar field with production of more than 500,00 barrels/day.
21. Offshore wells: These are similar to onshore wells but are under the sea. Oil rigs are therefore built in waters. – 33% of world’s oil production comes from offshore wells.
22. Tight (shale) oil: Tight oil means oil deposits trapped under hard rocks within the earth’s surface. – To get this oil, oil companies have to break those rocks through drilling and another process called Fracking. – More than 50% of oil produces in the US is through Fracking.
23. Sand oil: Heavy oil is naturally mixed with sand, clay, and water. Recovering this oil is more expensive than other methods. – Leading producers are in Canada and Venezuela
24. Supply of Oil
25. Oil Reserves: Oil is formed under the surface of earth and the process takes millions of years. – It is difficult to predict when all the oil on earth will end! – Currently most of the oil discovered is still under the surface.
26. Proved reserves of oil currently are estimated at 1.7 trillion barrels. (Proven reserves means there is a 90% probability that the oil will be extracted at current prices with current technology) – Most oil rich countries are Saudi Arabia, Venezuela, Canada, Iran and Iraq.
27. While we see US, Russia and China up there, the Middle East Region collectively is still the most important production region (makes up half of the world oil production) Source: US Energy Information Administration Oil Producing Countries
29. Demand of Oil
30. Oil is used in literally every economic activity. Hence higher economic growth leads to increased demand. Current global oil demand stands at 97 million barrels per day. Not getting into the types of oils and their refined products. If you need detailed information, hit me up on LinkedIn.
31. Oil Price
32. Crude oil price is quite volatile. Demand for oil changes slowly because there are few alternatives of oil. For the above reason, oil price normally depends more on supply. Producers of oil can increase or decrease production to change oil prices.
33. Typically, the price of oil is also affected by war and natural disasters. Prices of some oil products is affected by seasonality. For example, petrol prices in the US rise in the summer when people drive more. In contrast, price of heating oil rises in the winter.
34. Sectors in Oil Market
35. Three main sectors: Upstream sector – Initial discovery and production of oil Sectors – Upstream
36. Midstream – Transportation of oil from drilling wells to refineries Midstream
37. Downstream – Refining and marketing of oil to consumers Downstream
39. Major Players in Oil Market
40. International Oil Companies: These are privately-owned oil companies. The six largest companies are labelled as Big Oil. They are: BP, Chevron, ExxonMobil, Royal Dutch Shell, Eni, and Total.
41. National Oil Companies: These are government controlled oil companies. Most of them are upstream companies. They control more than 90% of proven oil reserves and 75% of world’s oil production.
42. World’s biggest national oil company is Saudi Aramco, Saudi Arabia
43. Powerful Industry Organizations
44. Organization of Petroleum Exporting Countries (OPEC) is an organization comprising mainly of middle eastern oil producers (US, Russia and China are not members of OPEC). OPEC members hold about 80% of the world’s oil reserves.
45. This means, they have the power to change the oil supply, which in turn changes oil prices. However, these days, OPEC is unable to control oil price. Reason? You tell me…
46. Energy Information Administration: Most authentic source of information related to oil.
47. That’s all folks