Thomas Mayer argues persuasively that Europe’s Economic and Monetary Union (EMU) could work if the member states would embrace a new EMU architecture. Even though all past monetary unions of sovereign states have failed, Mayer remains hopeful that the EMU can develop a more robust framework and contribute to the historical work of European unification. 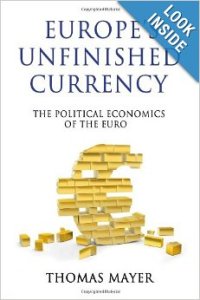 In Europe’s Unfinished Currency: The Political Economics of the Euro, Thomas Mayer, a senior fellow at the Center for Financial Studies at Goethe University Frankfurt and a senior adviser to Deutsche Bank, argues that Europe a monetary integration can work but only if policymakers repair its faulty original architecture in the correct way. He argues that a new framework for the euro must be based on two elementary principles:

1. The euro must be a nonpolitical currency, shielded from any form of fiscal dominance by member states of the Economic and Monetary Union (EMU).

2. Sovereignty and liability in essential fiscal policy matters must be firmly aligned at the national level.

Mayer posits that launching the EMU and creating the euro without some form of political union were risky undertakings because no monetary union has ever survived without some form of political union of its member states. Previous monetary unions failed because of a lack of fiscal and monetary discipline. Against this historical background, the architecture of the EMU seemed untenable.

In the euro’s successful first decade, the majority of eurozone countries exhibited fairly healthy growth. But the near default of Greece in April 2010, brought about by the financial crisis of 2007–2008, exposed the EMU’s fragile framework. Cheap credit was the glue that held the EMU together, and so when the credit bubble burst, the EMU unraveled.

The EMU eventually fell into a crisis of legitimacy as critics accused governments of having violated, among other things, the no-bailout clause of the Maastricht Treaty by monetizing the debt of insolvent banks and governments. In addition to the legitimacy crisis, the euro area experienced a balance-of-payments crisis. External current-account and internal government budget deficits could no longer be smoothly funded in the markets, and cautious investors fled countries with weak financial fundamentals.

Mayer argues—correctly, in this reviewer’s opinion—that fiscal and political union is unlikely because it is unrealistic to expect such a union to have a politically and fiscally dominant federal government. He believes that the only realistic option is to return to the original design of the EMU, whereby each country is responsible for its own government finances and the European Central Bank (ECB) aims for price stability within the union.

The historical model that comes closest to the fiscal policy requirements of the EMU is that of the United States in the 19th century. The individual states were both sovereign in their budget decisions and fully responsible for their finances and were thus left to default on their debt whenever they over borrowed. Pressure for fiscal policy discipline had to come from the market because the political influence of the federal government was limited by its relatively small size. Mayer persuasively argues that there must be a lender of last resort that has access to central bank credit during a financial crisis, when capital markets are closed to virtually all borrowers.

According to Mayer, the EMU needs to be based on politically neutral money and national fiscal sovereignty, coupled with national liability. Mayer’s proposed new EMU architecture is based on five building blocks:

1. EMU governments are held fully liable for their financial decisions.

3. The Central Bank lends funds of last resort in close cooperation with the European Systemic Risk Board and the European Monetary Fund (EMF).

5. The European System of Financial Supervisors ensures an appropriate financial architecture in which public sector debt is considered subject to default risk, cooperates with the EMF in restructuring or resolving insolvent banks, and manages a common deposit insurance scheme.

Because not all present and future EMU member countries can be expected to remain “fit” for the EMU, leaving the EMU without also leaving the EU should be allowed as a last resort to stabilize the economy.

Without a new architecture, Mayer asserts, the long-term survival of the EMU in its present form appears to be at risk. He envisages two possible future mutations.

In the first mutation, the ECB would be dragged into monetizing the deficits and debt of insolvent governments and banks. Over time, this action would lead to the formation of a new “hard currency” union centered on Germany, with the existing EMU continuing as a “soft currency” union. The hard union could exist within the soft union, with cash shared by all members but with the new hard money adopted only by the financially strong members, which would include AAA rated countries and EMU member countries with solid government finances.

In the second mutation, the EMU would be reduced to a hard currency union by the exit of all countries unable to operate under a hard budget constraint. These countries would return to their national currencies. Owing to the economic pain that an EMU exit would inflict on weak countries, the first mutation would seem to be more likely than the second.

In Europe’s Unfinished Currency, Mayer cogently argues that the European Economic and Monetary Union could work, provided the member states embrace a new EMU architecture. Even though all monetary unions of sovereign states have failed in the past, Mayer remains hopeful that the EMU can develop a more robust framework and contribute to the historical work of European unification.