Throughout this long and multifaceted work on the recent financial crisis and its aftermath, Professor Blinder demonstrates that he is the rare academic economist who writes clearly about a complicated topic, clarifying complex issues for readers who remain confused about what happened. Some readers may find his proposed remedies problematic.

If writing the second draft of history is supposed to involve both fact telling and interpretation, Alan Blinder’s After the Music Stopped: The Financial Crisis, the Response, and the W 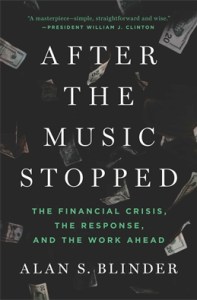 ork Ahead certainly qualifies. But if books written several years after the worst financial crisis since the Great Depression are supposed to reflect a deeper understanding than those written in the throes of the emergency, this one falls short. Moreover, as the subtitle indicates, the author attempts to combine work of a descriptive nature and work of a prescriptive nature into a single, large, and far-reaching undertaking.

Although Professor Blinder purports to examine only the why of both the financial crisis and the economic meltdown, he expends a good deal of ink identifying the who and the what of those dual calamities. Like many other post-crisis analyses, this book lays out a list of primary villains. And like many other accounts, it ignores the fact that the country has suffered through other periods of inflated asset prices, excessive leverage, incomplete or ineffective regulation, and scandalous corporate behavior without descending into a financial or economic spiral. Most of Blinder’s explanations of his villains’ activities are cogent and easy to follow. But he does the reader a disservice by ignoring earlier episodes of villainy. A closer examination of the historical record could have shown how certain governmental responses to problems may have helped create the conditions that inevitably led to the emergence of new problems.

In recounting the litany of his villains’ misdeeds, Blinder makes clear his penchant for more government oversight and less freedom for market participants. Although he has no practical experience in the financial markets, he is quick to chastise professional participants for becoming unduly enamored of rising prices, leverage, and complexity. To be fair, he is not the only academic economist to display some naivete about the profit-seeking behavior of business people forced to cope with unusual market conditions. (It is noteworthy how many journalists, regulators, academics, and other observers have written about the crisis and how few direct participants and decision makers have chosen to offer their “here is why we did what we did” perspective.)

Blinder’s chronological narrative of events throughout 2007 and 2008 is useful. His writing is clear, and his tone is both educational and conversational. His straightforward recounting of responses by the U.S. Federal Reserve Board, the U.S. Congress, the Bush administration, and the Obama administration to the nearly fatal economic meltdown of late 2008 and 2009 is also well done. A former Fed vice chairman, Blinder does not hesitate to criticize certain governmental actions he believes were ill advised. Even more refreshingly, he states quite forcefully that communications by “officialdom” to the general public regarding its actions set new lows for ineffectiveness and probably made it more difficult to take the necessary remedial steps.

If After the Music Stopped had stopped there, it might have joined the list of classic accounts of economic calamities. Clearly, however, “the work ahead” was an important priority for the author. Blinder devotes a large portion of the book to critiquing the processes by which the authorities decided which steps to take to resolve the financial crisis. Along the way, he promotes a dozen reforms aimed at preventing—or dealing more effectively with—the next one. Moreover, taking full advantage of his platform, Blinder revisits historical policy disputes, laments the involvement of parties whose political interests overwhelmed their economic judgment, and digresses into superfluous commentaries on quantitative easing and the European debt crisis. (It would be churlish to suggest he felt a need to justify his one-year leave of absence from Princeton University by including as many elements as possible in this tome.)

Throughout this long and multifaceted work, Professor Blinder demonstrates that he is the rare academic economist who writes clearly about a complicated topic. This former (and future?) policymaker/adviser also shows how one’s worldview inevitably colors even a good-faith effort to tell the complete story of the recent financial crisis.

It is easy to appreciate this narrative’s usefulness in clarifying complex issues for readers who remain confused about what happened. It is more difficult to accept the author’s prescriptions for dealing with this recent period of financial and economic distress and with possible future problems.