Pakistan as an investment case

Though Pakistan offers a huge potential for international investors, many companies have lately been pulling their operations out of the country primarily due to security and economic concerns. I would like to shed light on some of the important economic indicators which foreign (both direct and indirect) investors keep their eye on before investing in a country. Ironically, most of these indicators give a red signal to investors keen on investing in Pakistan. 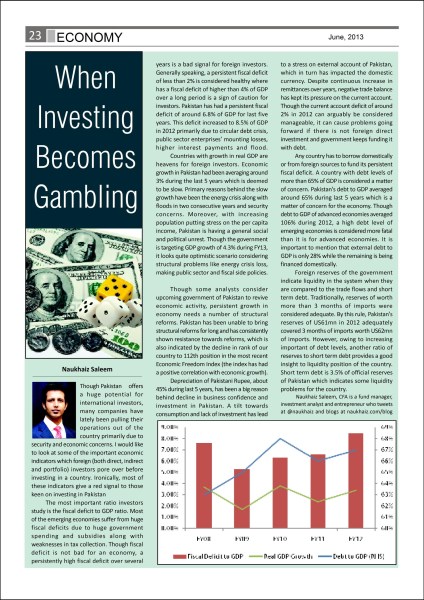 Countries with growth in real GDP are heavens for foreign investors. Growth of more than 4% in GDP is normally considered satisfactory for most of the investors. Economic growth in Pakistan had been averaging around 3% during the last 5 years which is considered slow for a developing economy with potential for investment return. Primary reasons behind the slow growth has been the energy crisis along with floods in consecutive two years and security concerns. Moreover, with increasing population putting stress on the per capita income, Pakistan is having a general social and political unrest. Though the government is targeting GDP growth of 4.3% during FY13, it looks quite optimistic scenario considering structural problems like energy crisis, loss making public sector and fiscal side policies.

Though some analysts consider new government in Pakistan to revive economic activity, persistent growth in economy needs a number of structural reforms. Pakistan has been unable to bring structural reforms for long and has consistently shown resistance towards reforms, which is also indicated by the decline in rank of our country to 112th position in the most recent Economic Freedom Index (the index has had a positive correlation with economic growth).

Depreciation of Pakistani Rupee, about 45% during last 5 years, has been a big reason behind decline in business confidence and investment in Pakistan. A tilt towards consumption and lack of investment has lead to a stress on external account of Pakistan, which in turn has impacted the domestic currency. Despite continuous  increase in remittances over years, negative trade balance has kept its pressure on the current account. Though the current account deficit of around 2% in 2012 can arguably be considered manageable, it can cause problems going forward if there is no foreign direct investment and government keeps funding it with debt.

An country has to borrow domestically or from foreign sources to fund its persistent fiscal deficit. It discourages investment if any country has debt levels of more than 65% of GDP. Pakistan’s debt to GDP averaged around 65% during last 5 years which is a matter of concern for the economy. Though debt to GDP of advanced economies averaged 106% during 2012, a high debt level of emerging economies is considered more fatal than it is for advanced economies. It is important to mention that external debt to GDP is only 28% while the remaining is being financed domestically.

(Naukhaiz Saleem, CFA is an fund manager, investment analyst and entrepreneur who tweets at @naukhaiz and blogs at naukhaiz.com/blog)