Note: All dates, figures, and characters are real. 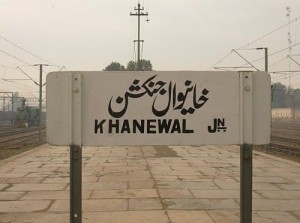 Khanewal and its history is not something that you normally think about. May be you all are not as jobless as I am. But then what else would you expect from a 106 year old. My great-grand children think I am just a liability, a super-old guy who used to mean something to their parents. Its not their fault. They have tried their best to feel attached to me. When they were young, they used to bring me food, used to massage me, used to walk me to the washroom. They cared for me. But you see, caring is a two way street. I never thanked them for all the stuff they have been doing for me. They could never see the affection hidden behind my cataract ridden eyes. They kept taking care of me because their elders told them to do so, and then their children continued doing the same. By now, I can hardly speak, see, hear, or even move. I keep laying down on the charpai, with the glucose drip on my arm, constantly trying to figure out why I am still alive. Why would He keep me alive for so long. I don’t owe anyone anything. Or may be i do! But i don’t have anything of my own now. Other than memories! Memories of an old guy who spent all of his 106 years in Khanewal. But do these memories carry any value? Do I owe them to the kids in my family? Do they need to know how this city was built out of a desert? Do they want to know? May be not! may be yes! May be that’s why He has kept me alive for all these years.

My name is Muhammad Yousaf and I am here to tell you the story of Khanewal.

Khanewal was still part of Kabirwala Tehsil; Its name was Khanewalah

Digging for Lower Bari Doab Canal started; William Roberts (owner of RCA) was principal of Bombay College at this time

Detailed posts on history, culture, buildings (Mandirs, Gurdwaras), and people mentioned above be posted in future.