My God! Airplanes are magical. You realize that when you have travelled via train from Karachi to any city in Punjab

My God! Even the kids cry in punjabi or saraiki on flight to multan

On plane: Ji its OK you may have mine :)
Once off the plane: The same guy fights in punjabi to get on the overcrowded PIA bus ‘ma huni jana a’

Yeah I heard that there’s a lot of construction going on in Multan . Thanks to PM saab. pakistan jae bhar ma, Multan sanwaro

Multan Airport reminds me of those PAF Sargodha Entry Tests I appeared for in 8th grade. Freaky memories :p

I swear Multan is totally deserted. No cars on roads. Juma prayers it is

Oh yeah baby! Fry me up multan. Its the 4th time that I asked the driver if the AC is working. He says it is. I am not convinced.

Lol Gilani’s daughter reminds me of that newspaper article she wrote for Bilawal. That was like honey dipped ice-ball ;)

You ask for any good place for shopping in Multan. And the answer you get is this three-storey Chenone Tower :p always – true story!

The driver took me to a continental guest house :@ He was instructed to let me get rest. These Mothers!

Back on route to Khanewal. It’s like a small drive from I.I.Chundrigarh to Hasan square in Karachi

Majority of the houses in Multan have no paint on the external walls. Or they just get distemper

Passing shah shams shrine in Multan, Pakistan. Shah shams was named so because he is said to have called the sun closer to multan when he was ridiculed by people and zamindar

Multan looks the same way on Friday as Karachi and Lahore look on Sunday (and Islamabad everyday :p) : that is ‘raped n deserted’

You know you are in Punjab when you can see a big double-storey houses. In Karachi you get to see them in selected areas only

Owing to similar design of houses in a Multan you can always tell where the bathroom is located in a house by looking from the outside :p

Omg! I can see lot of Satu Stalls around my roads. Now this is special stuff. Please don’t tell me you have never tried satu

Multan is building its own defense after such a long time. Good opportunity to play on brand name for DHA.

Ah! Tried to take a picture of Bahauddun Zikriya University – one of largest universities in Punjab. For me BZU is a university whose masters students can’t speak or talk in English – no offence please.

Multan and its surrounding – mostly crowded with the Barailvi sect in Muslims. Too many people with green amamas (turbans) and mosques with shouting amamas

Water parks in Multan: the rule is to stay away from slides. Every day they have injured people there. I used to love water parks in my childhood. With growing age, I find no entertainment as filthy as it can be. If you have been to Eater Park in Lahore and Multan you must have seen people playing volley ball in water pools with aam ki guthli :p 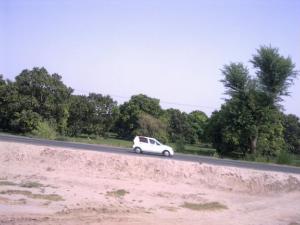 Ah! People swimming in streams in shalwar and no shirt. That’s the classic summer scene in Punjab, Pakistan

Ok if any one of you has not tried daal mash with fresh roti on any truck wala hotel on any highway, you need to give it a try!

Red colored cows are more abundant in Multan than any other city of Pakistan. A pride symbol it is!

Ever took bath in front of a tube well pipe in Pakistan. It has its own ecstasy! Try it dude

Masali school in Muzafargarh – a boarding school breeding gays in Pakistan – I am not exaggerating. A disasterous educational institute

Where else in Pakistan would you stop to buy a water bottle and get lassi instead owing to the unavailability of drinking water? Multan it is :)

Do you know what’s ‘kasi’? A very small village with very less population is called ‘kasi’. They are named like ‘aik kasi’, ‘do kasi’, ‘teen kasi’ …

And I have reached Khanewal finally. Will sign off soon since it will take me an hour to reach home because u have to meet every other guy here

Good thing in small cities is, everyone knows you. Small distances take a longer time to cover because you have to stop so many times to meet people

One thought on “Journey through Multan – A Tale in Tweets”